A little over a week ago, I told you about this gorgeous Printer’s Triple Console Cabinet.

I said I would build it. I said I had the skill (probably). But I was a little nervous about it… so it took a few days to build up the courage to jump in.

I picked out a stain.

Then I tortured a lovely man named Miguel at my local Johnson’s Hardware for over an hour.

That is, I had him cutting wood for the crazy lady with “plans.”

Thank goodness I did that, I drive a Suburban and it was still a challenge getting the cut wood into the car. **note to self: next time remove child car seats BEFORE purchasing large amounts of wood.**

Then… I did nothing.  For days.

I let that pretty wood sit because, frankly, I was scared of it. I’ve never built anything before. I have NO idea what I’m doing! Some nice lady on the internet told me I could build this, so I thought I could? CRAZINESS!! I’m so clumsy, I literally fell off of the porch last week! What was I THINKING??!!?

But… I spent the money, I committed to this project. Like a marriage. For better or worse, I had to jump in. So I did.

I started by drilling the pocket holes:

Lots, and lots, of pocket holes.

At the advice of Ana White – inspiration builder, I purchased a Kreg Jig. This thing helps you drill the holes at an angle to make screwing two pieces of wood together MUCH easier… Way easier, and way better looking too. You don’t have to worry about covering up the screws after the project is done.

It took some practice to get a feel for the jig and the drill, but eventually I got the hang of it. I only destroyed one board, so that’s not too bad.

Then, after a short pep-talk,  I began assembling my first side of the frame. Again…I made a mistake. Small mistake with measuring the distance the supports should be, but an easy fix. I stood back and surveyed my handiwork….

I added the bottom supports and it still looked right. Well… What’s next in the plans? Build doors. Ok. I can do that.

I began by laying out my wood in the pattern it should have, 1×2 alternating with 1×3. Add supports to hold doors together and, there ya go:

You’ll likely notice that some of my wood was stained before I began to build the doors… Long, long ago, I had the bright idea to rebuild our bench. You know the kind, wrought-iron legs, wooden seat? Well, not so smart after all. I have had that wood for 3 years. Never did rebuild that bench.. It saved me a few bucks here though. I think the pre-stained pieces will make an interesting contrast once it’s finished. I hope. **fingers crossed**

Just as I picked up the drill to secure the supports for the doors, my husband came out to remind me that my children expect to eat in the evenings and could I please make dinner?? It’s good he was nice, I had weapons.

Unfortunately, that meant I had to put my little project on hold til tomorrow. At least it gave me a chance to get the tweezers for all of these splinters….

Stay tuned,  Maybe I can finish it after all…. 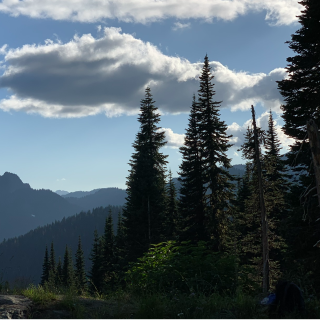